The PANDA Virtual machine has once again been updated, and you can download it from:

System calls are of great interest to researchers studying malware, because they are the only way that malware can have any effect on the world – writing files to the hard drive, manipulating the registry, sending network packets, and so on all must be done by making a call into the kernel.

In Windows, the system call interface is not publicly documented, but there have been lots of good reverse engineering efforts, and we now have full tables of the names of each system call; in addition, by using the Windows debug symbols, we can figure out how many arguments each system call takes (though not yet their actual types).

I recently ran 24,389 malware replays under PANDA and recorded all the system calls made, along with their arguments (just the top-level argument, without trying to descend into pointer types or dereference handle types). So for each replay, we now have a log file that looks like:


The first column identifies the process that made the call, using its address space as a unique identifier. The second gives the name of the call, and the remaining columns show the arguments passed to the function.

As usual, this data can be freely downloaded; the data set is 38GB. Each log file is compressed; you can use the showsc program (included in the tarball) to display an individual log file:

Here are a few that came out from sorting the list of system calls in the malrec dataset and then searching Google for some of the least common:
Of course, we can't say for sure that the replays that execute these calls actually contain exploitation attempts. After all, there are benign ways to use each of the calls, or they wouldn't be in Windows in the first place :) But these are a few that may reward closer examination; if they are in fact exploit attempts, you can then use PANDA's record and replay facility to step through the exploit in as much detail as you like. You can even use PANDA's recently-fixed QEMU gdb stub to go through the exploit instruction by instruction.

You can peruse the full list of system calls and their frequencies here: 32-bit, 64-bit. Let me know if you find any other interesting calls in there :)

If you want to know which log files have which system calls without processing all of them, I have created an index that lists the unique calls for each replay:
Also, Reddit user trevlix wondered whether the lack of pointer dereferencing was inherent to PANDA or something I'd just left out. My response:

One Weird Trick to Shrink Your PANDA Malware Logs by 84%

When I wrote about some of the lessons learned from PANDA Malrec's first 100 days of operation, one of the things I mentioned was that the storage requirements for the system were extremely high. In the four months since, the storage problem only got worse: as of last week, we were storing 24,000 recordings of malware, coming in at a whopping 2.4 terabytes of storage.

The amount of data involved poses problems not just for our own storage but also for others wanting to make use of the recordings for research. 2.4 terabytes is a lot, especially when it's spread out over 24,000 HTTP requests. If we want our data to be useful to researchers, it would be great if we could find better ways of compressing the recording logs.

As it turns out, we can! The key is to look closely at what makes up a PANDA recording:

The first of these is highly redundant and actually compresses quite well already – the xz compression used by PANDA's rrpack.py usually manages to get around a 5-6X reduction for the nondet log. The snapshots also compress pretty well, at around 4X.

So where can we find further savings? The trick is to notice that for the malware recordings, each run is started by first reverting the virtual machine to the same state. That means that the initial snapshot files for our recordings are almost all identical! In fact, if we do a byte-by-byte diff, the vast majority differ by only a few bytes – most likely a timer value that increments in the short time between when we revert to the snapshot and begin our recording.

With this observation in hand, we can instead store the malware recordings in a new format. The nondet log will still be compressed with xz, but now the snapshot for each will now instead be stored as a binary diff with respect to a reference snapshot. Because we have two separate recording platforms and have changed the initial environment used by Malrec a few times, the total number of reference snapshots we need is 8 – but this is a huge improvement over storing 24,000 snapshots! The binary diff for each recording then requires only a handful of bytes to specify.

The upshot of all of this is that a dataset of 24,189 PANDA malware recordings now takes up just 387 GB, a savings of 84%. This is pretty astonishing – the recordings in the archive contain 476 trillion instructions' worth of execution, meaning our storage rate is 1147.5 instructions per byte! As a point of comparison, one recent published instruction trace compression scheme achieved 2 bits per instruction; our compression is 0.007 bits per instruction – though this comparison is somewhat unfair since that paper can't assume a shared starting point.

You can download this data set as a single file from our MIT mirror; please share and mirror this as widely as you like! There is a README included in the archive that contains instructions for extracting and replaying any of the recordings. Click the link below to download:

Stay tuned, too – there's more cool stuff on the way. Next time, I'll be writing about one of the things you can do with a full-trace recording dataset like this: extracting system call traces with arguments. And of course that means I'll have a syscall dataset to share then as well :)
Posted by Brendan Dolan-Gavitt at 9:55 AM 4 comments:


Some notable changes:
There's lots more that has changed, and I will try to write up a more detailed post about all the cool stuff PANDA can do now soon!
Posted by Brendan Dolan-Gavitt at 7:22 PM No comments:

It's now been a little over 100 days since I started running malware samples in PANDA and making the executions publicly available. In that time, we've analyzed 10,794 pieces of malware, which generated:
I've been pleased by the interest malrec has generated. We've had visitors from over 6000 unique IPs, in 89 different countries: 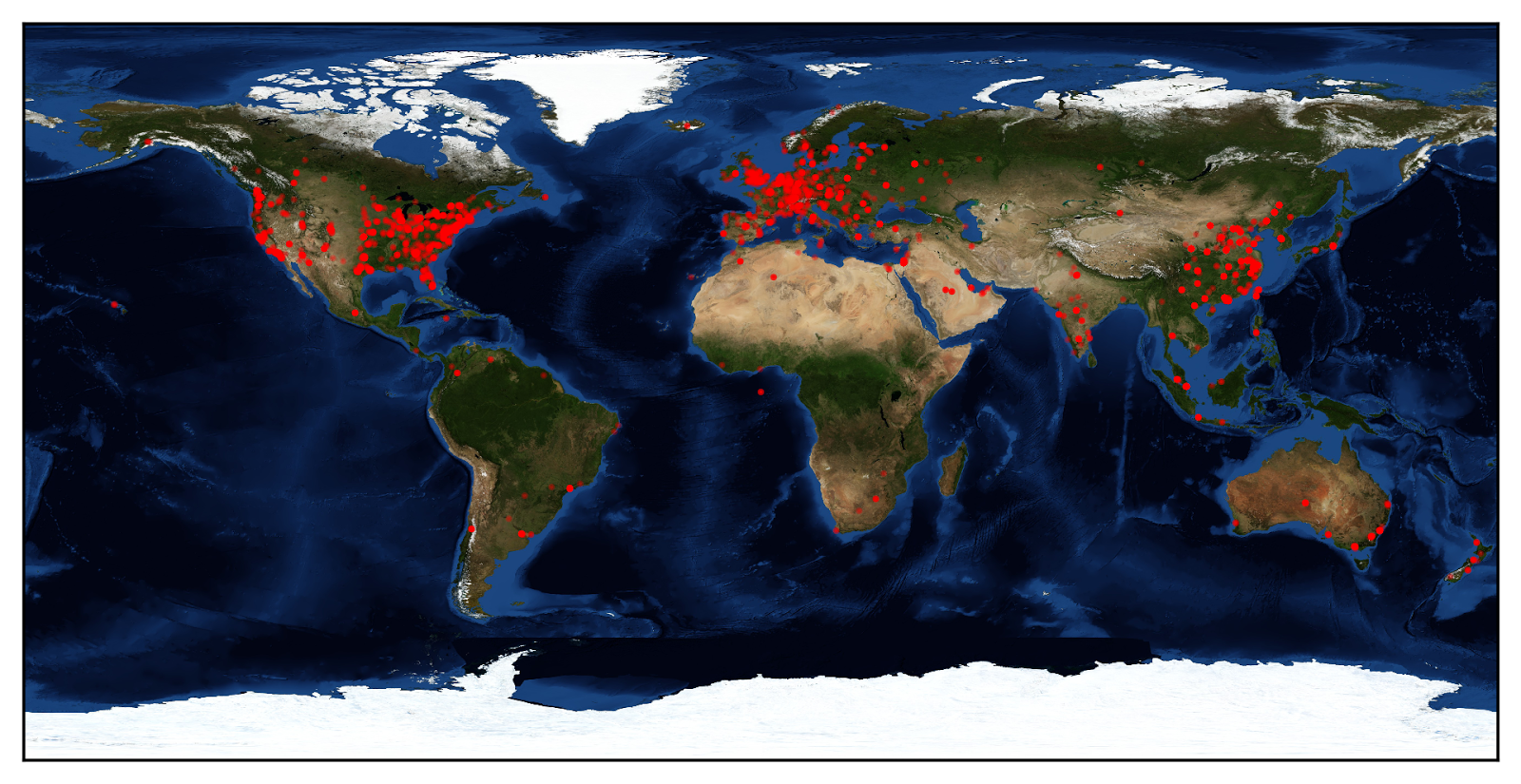 There's a lot of great stuff in these ~10K movies. An easy way to get an idea of what's in there is to sort by filesize; because of the way MP4 encoding works, larger files in general mean that there's more going on on-screen (though only up to a point – the largest ones seemed to be mostly command prompts scrolling, which wasn't very interesting). I took it upon myself to watch the ones between ~300KB and 1MB, and found some fun videos:

Though they didn't always invest in fancy art design:

Finally, there's the weird and random:

Trust Me, I'm a Doctor

After malrec runs a sample in the PANDA sandbox, it checks to see what VirusTotal thinks about the file, and saves the result in VirusTotal's JSON format. From this, we can find out what the most popular families in our corpus are. For example, here's what McAfee thought about our samples: 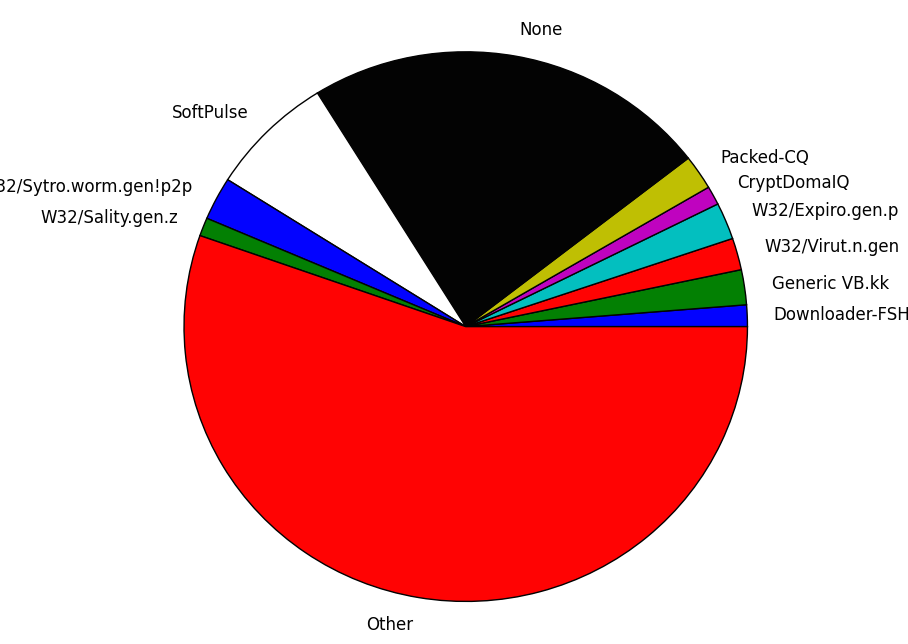 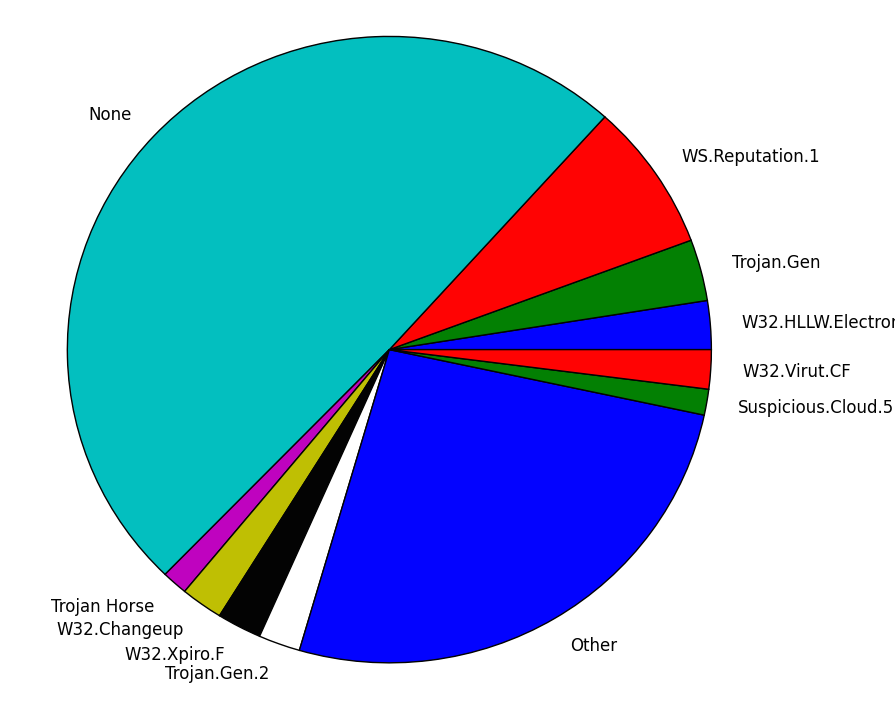 In the graphs above, "None" includes both cases where the AV didn't detect anything and cases where the sample hadn't been submitted to VirusTotal yet. You therefore should probably not use this data to try and draw any conclusions about the relative efficacy of Symantec vs McAfee. I'd like to go back and see how the detection rate has changed, but unfortunately my VirusTotal API key is currently rate-limited, so running all 10,794 samples would be a pain.

Making recordings on such a large scale has exposed bugs in PANDA, some of which we have fixed, others of which need further investigation:

With our current disk usage (1.2TB used out of 2TB), I'm anticipating that we'll be able to run for another 50 days or so; hopefully by then I'll be able to arrange to get more storage.

Meanwhile, I've started to do some deeper research on the corpus, including visualization and mining memory for printable strings. I'm looking forward to getting a clearer picture of what's in our corpus as it grows!
Posted by Brendan Dolan-Gavitt at 8:39 AM 3 comments: